She slipped into the nation’s capital on a clandestine mission of hope.

Under a black cap and dark sunglasses, Sandy Ceas went mostly unnoticed Sunday as she wove her way down Pennsylvania Avenue, past the tourists gawking at the White House and through the throngs of hundreds of thousands of people gathering for a concert on the National Mall.

But in her wake, the undercover artistic agent from Littleton had left dozens of little, surprise gifts: small, ceramic “blessing doves,” placed at random and left as gifts with no explanation.

“What is that?” one man said, finding one of the fragile little birds on a pedestal along the White House Ellipse.

The man called to a friend to get his picture with the ceramic critter in the foreground and the future home of President-elect Barack Obama in the background.
Watching nearby, Ceas, 57, smiled with satisfaction.

“That’s a real blessing on the White House,” she said quietly to her husband, Steve.

And then they walked away to make serendipitous mischief somewhere else.

Anticipation is a powerful magnet leading up to Tuesday’s inauguration of the first black president. The pilgrims come in all shapes, sizes, ages and colors.

And each one seems to have a different way of connecting to the event – adding his or her emotions to the air of change hovering over the nation’s capital.

At the foot of the Lincoln Memorial on Sunday, the crowds rivaled the one the Rev. Martin Luther King Jr. faced while giving his I Have A Dream speech in 1963. Forty-six years later, the crowd was every bit as diverse and united as King once envisioned, with black folks and white folks standing shoulder to shoulder or walking arm in arm.

Nearly a mile from the stage where Denzel Washington, Bruce Springsteen and an all-star cast of performers made cameo appearances, a young girl’s voice rang out when Obama’s face appeared on a distant big-screen television.

She said she had an idea for the type of dog the new first family should get, but she said that was a secret between the president-elect and herself.
Read the full article, as well as comments made at the provided link. 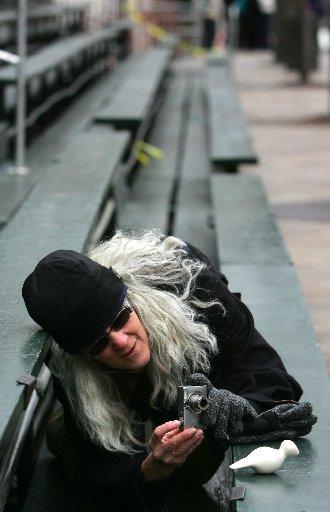